Many homes in North Texas,  built before 2002, were not built with an expansion tank and have high water pressure but don’t have that regulator. After 2002, every home in the area has one. They typically last 8-12 years.

or complete the form below

To learn more about Pressure Reducing valve Repair, watch the video below or read through the video transcript below.

In Frisco, for example, the water comes from the city at 110 psi and leaves at 60 psi. When you have that regulator installed… it can take that excess pressure.

The attic’s ambient temperature in the summer can get up to around 140, so Trident Plumbers try to assemble as much as possible outside before going into an attic. The current expansion tank is rusted, damaged and its floating above in the attic.

If it ever did let go, it could cause water damage. We are installing the expansion tank over the water heater pan so if it leaks, it won’t damage the home.

Does every home in Frisco has to have an expansion tank?

How Long Do They Last?

Water Heater Expansion Tanks typically last eight to 12 years, some people get 15 to 20, but the average lifespan is about 12 years. 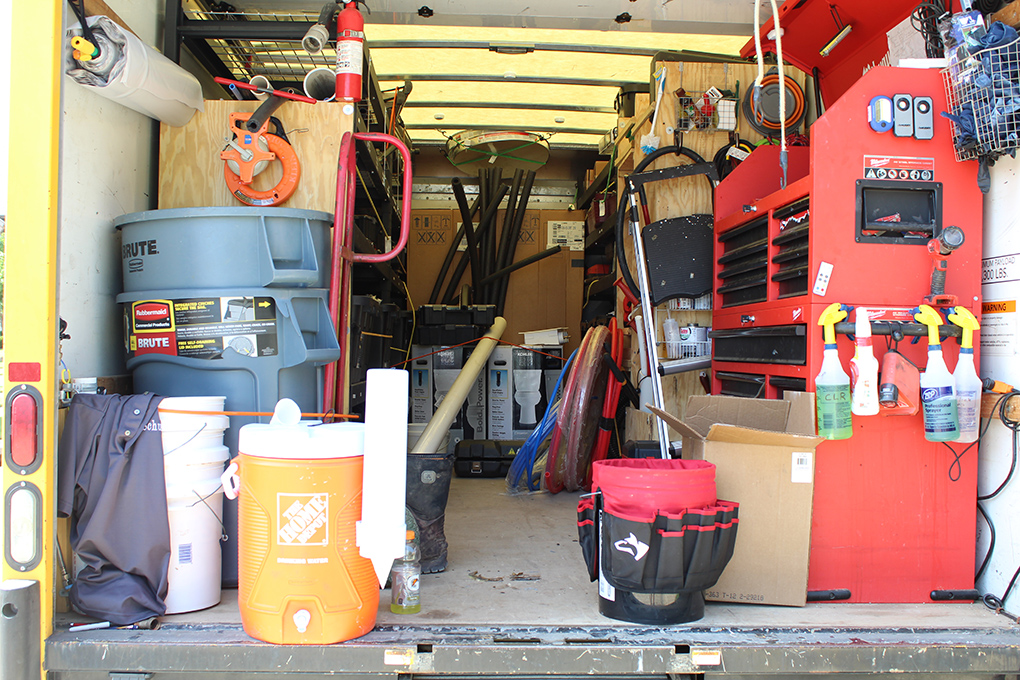 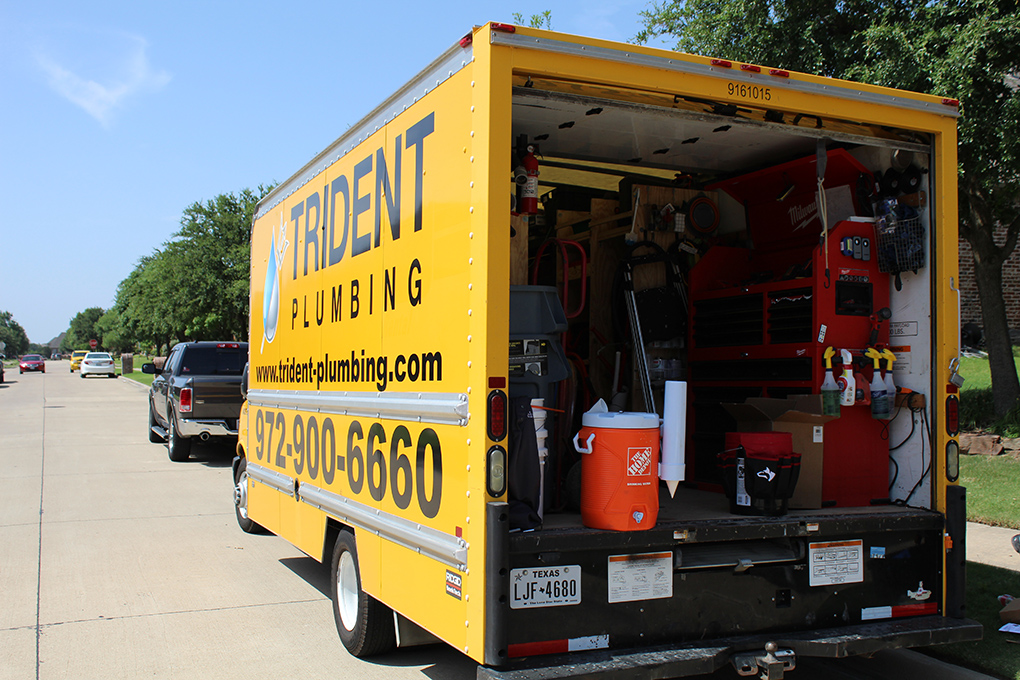 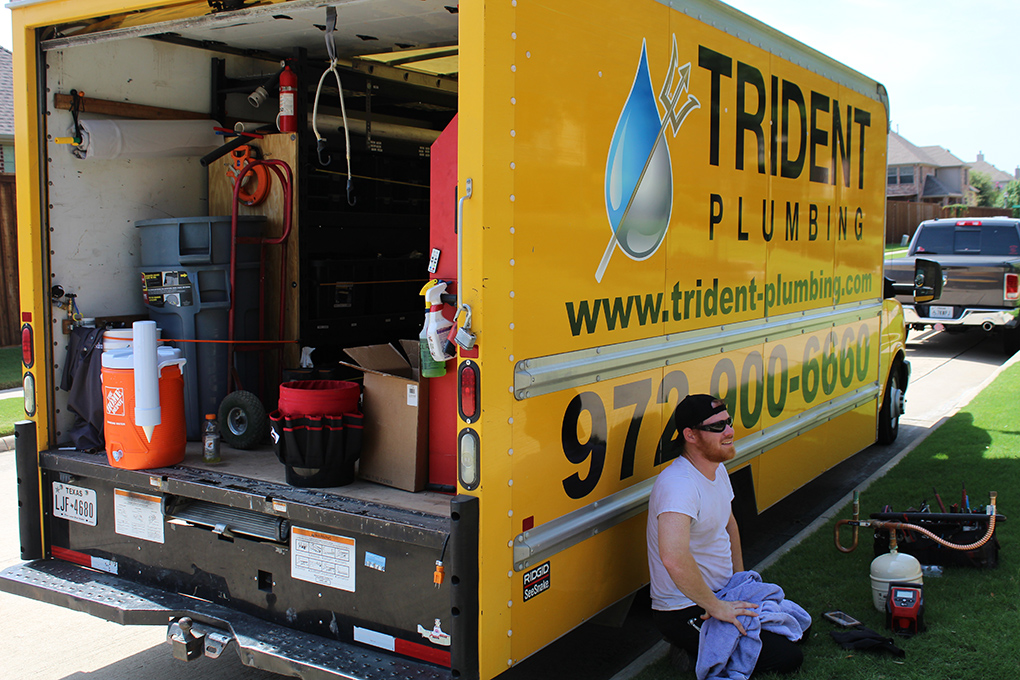 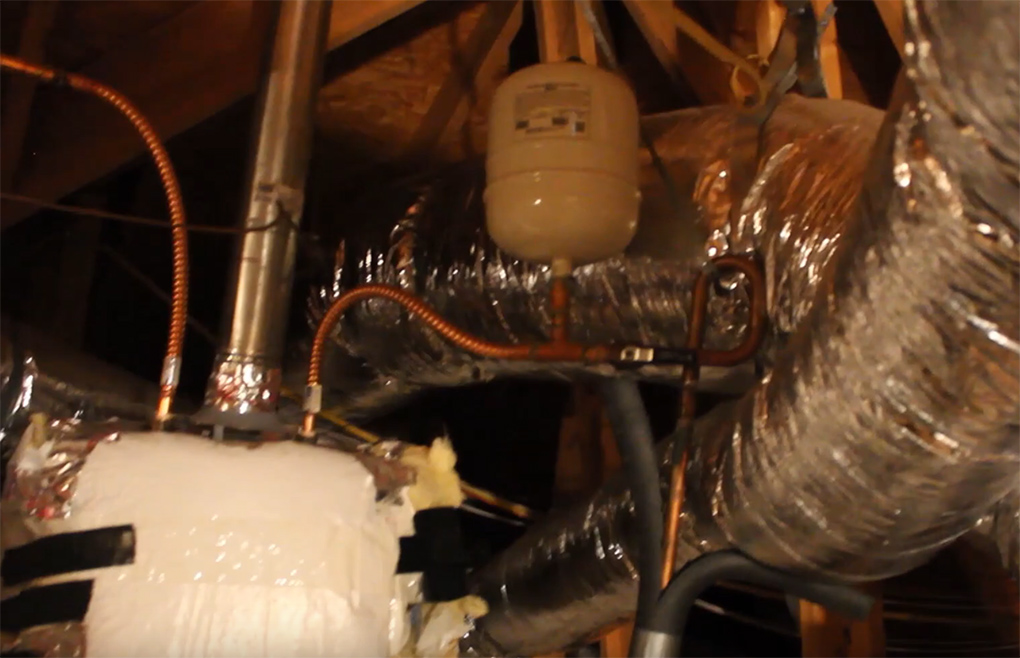 In 2002, the city of Frisco created an ordinance that says all homes built 2002 and newer going on have to have a pressure reducing valve in the flower bed – or somewhere inside the garage or home.

In 2008, the city of Frisco realized you had to have the expansion tank to go with it. So there are homes in the ’05 range that have this that do not have this, but when you put in a pressure reducing valve, what you’re doing is called closing the loop. The water comes from the city at 110 psi and leaves at 60 psi. When you have that regulator installed, 60 psi can never push back on 110. The 110 is stronger. That’s why you need the expansion tank, a place to take that excess pressure.

A Broken Pressure Reducing Valve can cause premature wear on all of your appliances, anything that is attached to the cold water system, washing machines, dish washers, refrigerators, toilet fill valves are typically the first to go.

Homeowners will notice a humming, banging, knocking in the walls. 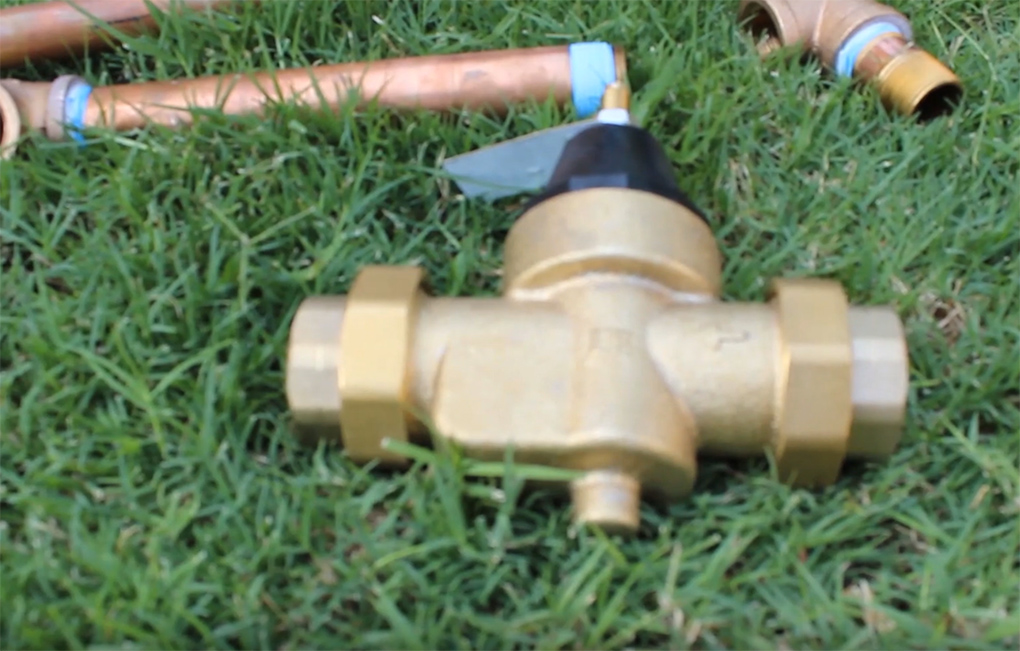 The pressure reducing valve has a lot of city codes that go with putting this in:

Plumbing code in Frisco says that you can have your water line at a minimum of 12 inches deep. This home here is at about 36 inches so it’s just going to be a little bit more of excavation required, but what we’ll do is we’ll raise it to the top of that box, so that way in the future if this ever has to get swapped out again, 10-12 years from now, we won’t have to re-excavate that deep down into the ground.

There are lots of plumbing companies to work on these, but they’re not familiar with Frisco’s ordinances and a lot of times they don’t do these correctly, so it’s nice to have a local plumber that lives and works in this area to install this. This does require a permit and the inspector does want to come out and inspect the work to make sure it was done correctly. This can be done while the home is being built or replaced after a period of time. The city still wants to come out and look and make sure this is done up to current code and standard. 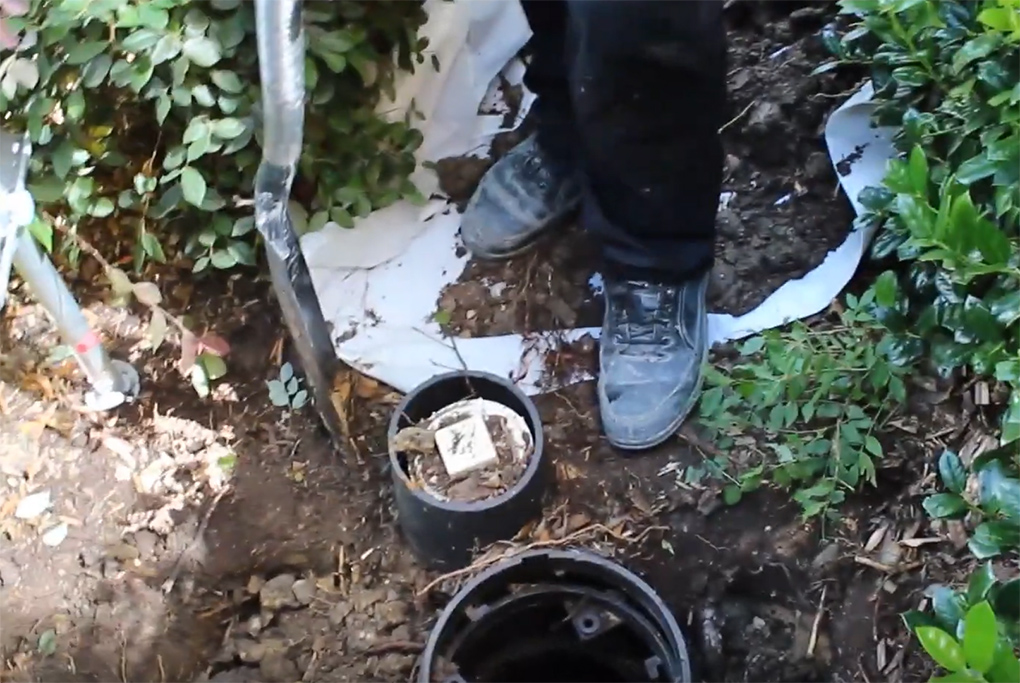 Process to a Pressure Reducing Valve

Transcription from video – This one’s about three feet. Two,three feet. So you’ve got to dig this whole thing out. We have  to dig it out and get about six inches below the water line that’s in there currently. There are tons of roots, because I had to remove all those trees already because they grew right over the top of the box.

We just basically lay plastic out and scoot all the mulch and everything back so that way we don’t disturb. When we’re done we can back fill it, re-mulch it all, and looks like we were never here, we’re just with the bigger box and better set up.
The valve will be right here versus three feet down. Yeah, you don’t have to reach in a dark, deep hole. Mm-hmm. This was built right around 2002, 2004 whenever PRV’s were mandated, but they didn’t have to be raised up yet. Like Dan said, most of them go on the wall now. But now they’re way deep under ground.

Why is the PRV put in the flower bed?

Just that’s what they want. Each municipality can interpret the code however they want it. So just to hide it a little bit I guess? Yeah, I’m assuming so, or so that there’s no damage inside the house. It’s all outside if it leaks. It feeds the flowers if it leaks and then you don’t know.

There’s one plumbing code but each municipality can dictate it however they want, so however they dictate the code is however you have to plumb. Frisco dictates it that the PRV needs to be raised up, the ball valve needs to on, there needs to be a union. Some municipalities don’t care.
It can be three feet deep in the ground and they don’t care. So it really just depends what municipality you’re in and you have to stay current with your codes to know what they’re wanting and what they’re expecting. Which means Daniel or me have to sit there and call the cities and find out if they’ve had any code changes, and if so we update our codes so that way we’re doing everything to codes that they want so we can pass our inspections the first time.

If you do it right the first time, it gives a better example and then if you stay in tune with that you’re never going to have a fail and that won’t make you look bad in front of the customer either like you don’t actually know what the city requires.

How many PRV replacement jobs have you done in Frisco?In Frisco, hundreds.  Yeah and the newest code that Frisco just did is you have to put a union on it now. They changed that within the past, you know, six months to a year. That used to not be code, but now you need a union on it. Whether it’s in the wall or in the ground, used to, unions had to be in the walls, not under dirt. 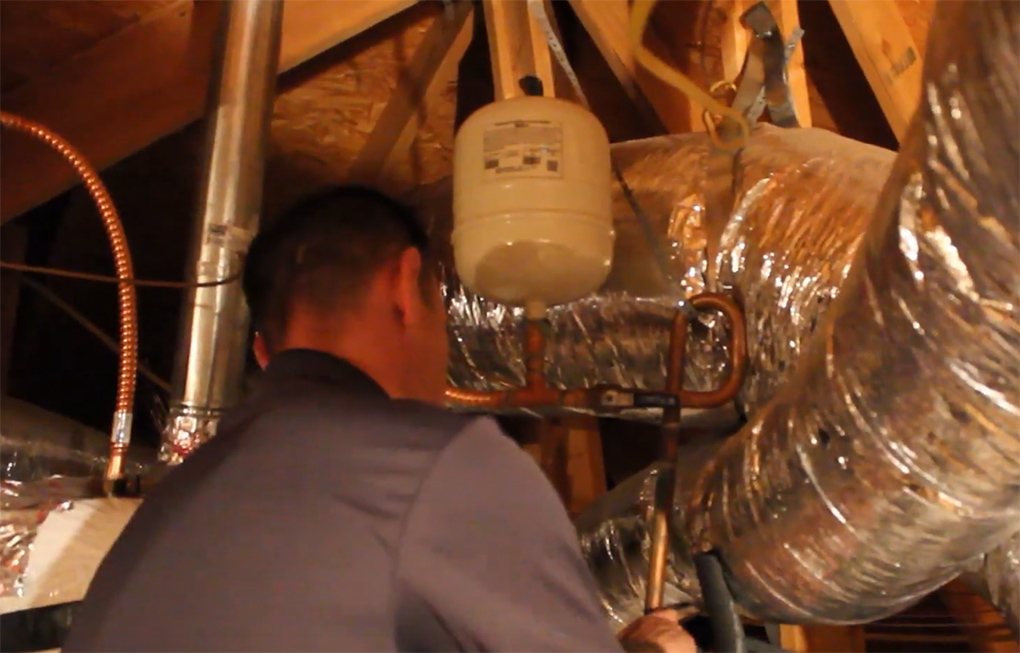 We’ve got a two gallon which is made for one heater, we have two heaters so this needs to be double the size. It’s over the attic so if it ever leaks it’s going to come straight down into his ceiling.

We’re going to move the new one over here above this pan and then it’s all welded together so we’re going to replace all of this. These heat traps, nobody uses these anymore. They’re not really outlawed, it’s just theories have changed over the years so being that there’s a welded on cup link and it’s all rough, we’re going to go ahead and cut all that out and start over. We’re just going to do it right the first time so that way, I mean, Lee’s not going to stay here, but whoever gets to live here doesn’t have to keep paying to do the same service over and over and over again.

This thing really is twice the size of that other older one.

So know what we’ll do is this. Step one, cut the water line. So this sucker is heavy and full of water, so it’s going to drop when I cut this and probably going to lose a little bit of water, so I try to be as quick as I can.

The very last step after this is just to come up and insulate once we check everything for leaks.